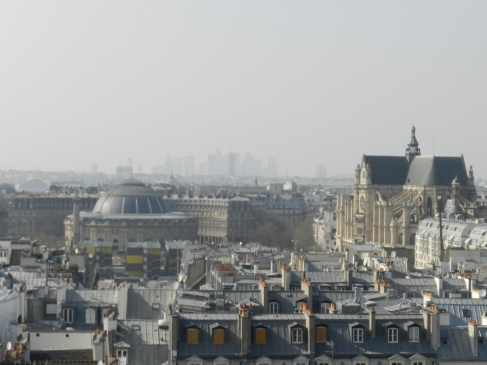 Les Halles was the location of the center city transport that provides more than five train lines. The number of lines that provided brings Chatelet-Les Halles became the busiest station in Paris. The station is most crowded during the times of departure and got off work at 08.00-10.00 and 16.00-19.00. During this hour many people moving together toward each destination.

These movements bring a huge impact on the development of the surrounding area, supported with the existence of a various facilities that are provided for the Paris citizen. These facilities include large shopping mall named Forum Des Halles, city parks, as well as pedestrian ways are equipped with an extensive range of shops with typical Parisian architecture of the middle ages. The existence of these facilities form the function tends towards trade and services. As well as the main activities that dominated by trading activity and recreation.

The movement is an important element in the development of a particular area especially for trade services. A large movement towards the location indicates the area accessibility and Les Halles is one of the locations in Paris that have a high level of accessibility, not only for private car but also the accessibility of vehicle access from public transport in the presence of Chatelet-Les Halles. But in the case of this area of activity and function that is the result of history.

Since long time ago Paris city citizen have known les halles as the trade and services center. This function even has already existed since the seventeen century when napoleon bonaparte ordered the construction of a large hall as a meeting point location. So then the government developed ten baltard as the trade and services location. Until in 1971 the tenth baltard has to be torned down because of the existence of traditional markets that is no longer considered to be accordance with the development of cities.

The trade, services activity and function are being stopped for eight years as a result of the destruction of the market. Then in 1979 the government of Paris has the initiative to build shopping center with futuristic architecture named forum des halles. Trade and services has been growing since that time until now. So that intermodal movements in les halles is just supporting the accessibility to this location. While the functions and the activity of this place is not derived from the movement of intermoda but it was a result of the history of the area in which are already known by the Paris citizen.